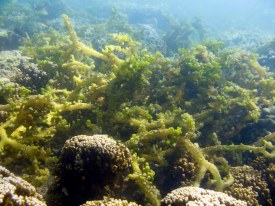 Algae are tough, fleshy, firm; up to 2 m tall. Thalli coarse, with axes and branches 1 – 2 cm diameter.  Frequently and irregularly branched, Kappaphycus smoother with little branching, while Euchema can be heavily spined.  Their shapes are plastic varying from a few small branches in shallow areas to large, intricately tangled, fleshy mats in deeper waters.

Smothering Seaweeds are the largest of the invasive alien algae.

The two Smothering Seaweed species, Kappaphycus alvarezii and Euchema striatum, are some of the largest tropical red algae, with extremely high growth rates, doubling in 15-30 days. Smothering Seaweeds have been introduced throughout the warm tropics for commercial cultivation. They are a major producer of kappa-carrageenan, which is used for medicinal purposes and as a homogenizer in milk products, toothpaste and jellies.Since their introduction in Kaneohe Bay in 1974, they have spread at the rate of 260 m/yr. The high growth rate, plastic morphology, and extremely successful vegetative regeneration make the two Smothering Seaweeds potentially the most destructive invasives in Hawaiian waters.

In Hawaii, Smothering Seaweeds mainly reproduce by vegetative fragmentation. At the tip of each branch is a cluster of apical cells potentially high in regenerative capabilities that are able to regenerate a new thallus after breaking off. A broken tip can grow into full-sized thallus in a short period of time.

These species has been highly successful at Kaneohe Bay, dominating the sandy spur and grooves on the reef flat. They inhabit barren sandy grooves where they do not appear to compete with native algal species. In other locations, Smothering Seaweeds have been found to provide habitat for a diverse invertebrate population and reef fishes. These red algae were found to have a higher index of species diversity than neighboring reefs without the alien. They are highly grazed and can be found to be the primary food item in gut contents of common herbivorous fishes. The algae’s large growth forms can be detrimental to corals by shadowing or smothering, thus causing coral death.

The red algae’s dispersal is thought to be constrained by size and weight, as they appear to become trapped in depressions and channels. The species are also constrained by high herbivory. Smothering Seaweeds have managed to spread to neighboring reefs with supportive physical factors and little grazing, where it is dominating the changing marine ecology.