First reported in the 1980’s, Leather Mudweed  (Avrainvillea amadelpha) is a widespread tropical alga that was possibly an accidental introduction in Hawai‘i. Leather Mudweed can be found attached to rock, coral rubble, or sandy reef flats, shallow subtidal to 80 m deep where there is low water motion.  It forms dense clumps often covered with silt and sand and overgrows coral rubble.  Since its introduction, this invasive alga has spread all along O‘ahu’s south shore where it has disturbed and replaced other species, including the native endemic seagrass, Halophila hawaiiana. 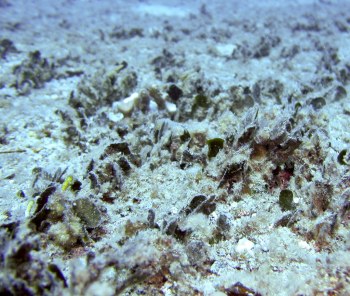 The closely packed blades of Leather Mudweed trap sediments that, with enough time, add fine silt to the sandy bottom, adding a mud layer. The alga can form thick mats that provide habitat for fouling organisms such as filter feeders (worms and molluscs) and other algae, completely changing the community structure of the reef flat.

In established communities, this green alga has invaded and now covers a large part of the substrate, becoming a secondary substrate for other reef algae. Growth proceeds from the basal region rather than from the blades, so plants are usually in tight clusters of single blade height. First found in 1981 on the leeward shore of O‘ahu, it is now found in large communities with Acanthophora spicifera along the southern shore of O‘ahu. Sandy bays once known for large native seagrass beds, (Halophila hawaiiana) are now overgrown with these invasive species.  This alga’s closely packed blades trap sediments and provide habitat for filter feeders such as worms and molluscs. With enough time, these trapped sediments add fine silt to the sandy bottom and create a mud layer upon the sand, thus changing the nature of the substrate.
Recently, deep water communities of Leather Mudweed have been found off the coastline of Oahu, and further studies and surveys are underway to determine the distribution of this alga.