The Hawaiian Islands are the most distant from any other land mass on earth. Because of this geography, their flora and fauna have evolved in isolation and are unique: about 25% of Hawaii’s reef fish, coral, and algae species occur nowhere else. Their isolated evolution, combined with human alteration of near-shore habitats, has made Hawaii’s marine habitats, especially coral reefs, particularly vulnerable to alien invasions.

Marine invasive species are recognized globally as a major threat to marine ecosystems, and locally are responsible for millions of dollars worth of damage to vital and important Hawaiian coral reefs as a result of diminished fisheries and lowered property values. These biological invasions dramatically affect reef ecosystems, causing a complete change in biodiversity and a shift from coral to algal dominated reefs. Human-caused changes to natural reef communities, such as overfishing, increased nutrients, sediments and pollution, make them more vulnerable to invasive species. Hawaiian reefs have experienced considerable damage from both introduced and native algal and invertebrate invasive species.

Alien invasive species are introduced species that have arrived accidentally by ballast water or hull-fouling of oceangoing ships, or by accidental and intentional releases of aquaculture species, aquarium specimens or bait. The most harmful of these invaders displace native species, change natural reef structures and food webs. Though there are hundreds of introduced algae and invertebrate species in Hawai‘i, only a few have demonstrated exceptionally dangerous invasive tendencies.

Five species of alien algae have become invasive in Hawai‘i: Prickly Seaweed (Acanthophora spicifera), Leather Mudweed (Avrainvillea amadelpha), Hookweed (Hypnea musciformis), Smothering Seaweed (Kappaphycus spp.), and Gorillo Ogo (Gracilaria salicornia). Prickly Seaweed arrived as an accidental “visitor” on the bottom of a shipping barge in 1950; it is not know exactly how Leather Mudweed arrived in Hawai‘i, and the latter three species were intentionally introduced on Oahu and Molokai in the 1970’s for experimental aquaculture for the agar industry. These “weedy” species have now spread from their initial sites of introduction and are competing with native marine flora and fauna.

Most alien algae populations are currently confined to discreet areas and may still be able to be controlled by removal and/or enhancement of native grazer populations. Other areas, particularly coral reefs, remain at risk from the spread of aliens from these sites.  This is why it is important to train our eyes to spot these unwanted visitors. 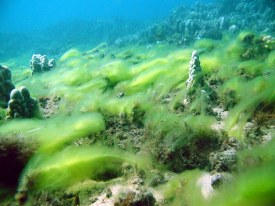 The native Cladophora sericea was found blooming on Maui as a result of excess nutrients.

In stressed or disturbed environments, normally benign native algal and invertebrate species can bloom, or grow out of control. As human impacts on local reefs increase, we cannot predict when, where or which species will become a problem. Signs of native blooms include changes in biodiversity, species composition and reef habitat.  Hawai‘i has had a number of incidences of native algae and invertebrate blooms going back to the 1970’s.