Why are Hawaii’s corals bleaching? 2015 FAQ

Posted on September 9, 2015 by gretasaeby

What is coral bleaching?

Coral bleaching is the loss of color from coral tissue allowing the white skeleton to show through.

Coral’s have an important relationship (symbiosis) with single-celled algae (zooxanthellae), which live in their tissues. The zooxanthella provides food for the coral and in return the coral provides a stable home for the algae. Most of the coral’s nutrition comes from the algae. Coral bleaching is the loss of color from the colony when the algae are expelled from the coral polyps and then the white coral skeleton is visible through the transparent coral tissue. 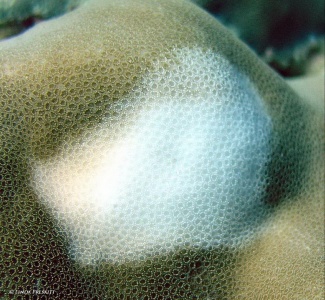 Why are our corals bleaching this year?

The ocean water is too warm for the corals.

Usually our ocean waters in August are around 80.60F (270C). However, this year the temperatures are up to 82.40F (280C). This extra heat stresses the coral causing them to expel their zooxanthellae.

Can corals recover from bleaching?

Yes, but only if the ocean temperatures cool down in time.

Coral’s become very hungry without their symbiotic algae providing their usual amount of food for the coral. If the coral’s are bleached for a short amount of time, then they have a good chance to recover. However, if the ocean temperatures stay hot too long, then the coral’s will starve to death.

If the coral dies will that affect the other sea animals?

Yes! The other sea animals will die or move away.

The coral reef is the foundation for the entire ecosystem and all of its critters. The coral colony forms the shelter that protects most of the smaller animals (crabs, shrimp, worms, small fish, etc.). It also provides food for other animals such as butterflyfish. Once the coral animal dies, then there is no more food for the butterflyfish and the coral skeleton, which provides shelter, will start to break down. Eventually, the system will collapse and the small critters will die or might move to other nearby areas.

If the coral dies will that affect us humans?

Yes! Our coastlines will not be protected from ocean waves and our fisheries will collapse.

Coral reefs provide a critical barrier to wave action and storm surge that protects our coastlines from erosion. Without the coral reefs, the waves wash up higher onto our shores and with more energy.

Many of the fish, that humans like to eat, depend on the smaller ocean critters for food. When the numbers of crabs, shrimp, and other smaller animals decline after the corals die, then the larger fish will go hungry. These larger fish will also eventually die or possible move to other nearby areas.

Corals also provide shelter for the young fish of most coral reef fish species. The coral colonies provide protection for the baby fish until they can grow big enough to take care of themselves. Without that protection, fewer fish grow up, reach adulthood and reproduce (produce babies) thus completing the cycle of life. This will produce a downward spiral for the fish populations. Fewer adults = fewer babies = fewer fish on our reefs.